Unfortunately I was so engrossed in trying out different techniques that I don’t have images of any actual finished items to share with you from the weekend jewellery making workshop, I don’t really have any finished items!  OK, to be strictly truthful I do have one paper yarn ‘nest’ which I completed and it is now hanging from a tree but it’s not my favourite piece so I’m not showing it, sorry!  Here however are a couple of pictures of two pieces I am happy with, the jewellery back is probably my favourite individual item but Angela did have to help me finish it!!!  The other point to note is that while I don’t like my own paper yarn ‘nest’ I do see the potential of the technique, more to follow when I return from US, I have plans for a ring and some other items using this as a starting point.  Now for the pics …..

Paper yarn and felt brooch with stainless steel brooch back

McSweeney media have sent out extensive coverage to the press this morning of my participation at the Irish and International Sheep and Wool Festival including a big write up about Horst’s upcoming trip to Clasheen and the first ever display of his couture garments outside the US!!!  There are three spaces that still need to be confirmed for his ‘Large Felt Garment’ workshop which we will be facilitating together from 17th to 19th June at The Studio in Bennetsbridge, Co. Kilkenny.  If you have been waiting until the last minute to either confirm your booking for Horst’s workshop or make a descision now is the moment, everything needs to be totally finished and all monies collected before I head off to California at the beginning of May!  Please email me asap if you have any questions or forward me on the balance of your course fee if you have not already done so, thanks to all of you who already have.  Martin and Jill, owners of The Studio have kindly offered excellent B & B accomodation on site and I have emailed all actual and potential participants with the details.  In case I have missed anyone out please let me know if you never got the message, with all my recent computer woes I wouldn’t be at all surprised if I have made a couple of errors!

Carmen and I spent a happy and productive afternoon continuing our experimentation with merino and artificial fabric.  Both of us have stiff backs after all our exertions during the complex bag workshop (just wait until you see the pictures when I post about that!) so we decided to stick with small projects today and have some fun together.

Midnight I brooch prior to beading

If you are interested in creating an experimental brooch or pendant like the one pictured on the left here is the process.

HAVE FUN!  More pictures of work I created during and after Lyda’s visit are now uploaded to Flickr.

Sorry about the lack of posts since last Tuesday, I am TOTALLY engrossed in Lyda Rump’s visit and our wonderful felting workshops!  Lyda arrived from the airport on Wednesday and Thursday was spent together visiting Cushendale Woolen Mills and Kilkenny city.  In the late afternoon friend and Irish feltmaker Maureen arrived and the rest of the day was spent chatting and having a ‘show and tell’ of Lyda’s felt!  The following morning another felting friend Cristina arrived to stay and then we were all set for more friends and participants to come for the felted accessories workshop.

Here are just two pictures from the first day’s workshop to tantalise you, full report and loads of pictures to follow over the next few days when I have time to stop and catch my breath!

Yesterday was ladies day at the Golf Club and as I only had a couple of hours in the morning to attack a felting project I decided to convert some flat felt samples into smart and colourful Christmas ornaments.  Using this great tutorial from Betz White I slashed, manipulated and stitched a large felt ogee.  Unfortunately I couldn’t find my tailors chalk (no surprises there!) so it took me a lot longer than it should have to cut the lines.  This was a bit frustrating but I didn’t want to make any mistakes and the stitching did compensate somewhat as for once it only took a couple of minutes to get through this dreaded task! The resulting ornament is definitely pretty but until I find my chalk I am just going to string this with some large glass beads and enjoy it hanging in one of the trees in my garden.  Any more of these ornaments will just have to wait until I am properly prepared at the slashing stage although I might get inspired to cut a few out from paper as I try and destash my interiors magazines!

I did put up some images of the felt and ceramic necklace on Flickr yesterday forgetting for a minute that they would automatically link through to my Facebook profile so here is a close up for you to see the contrast of felt and ceramic.

Close up of felt, ceramic and organza necklace

Hopefully the intended receipient won’t realise that the necklace is her Christmas present so the surprise will not be spoilt.  These large beads are strung on a copper coloured organza and this is an effect that I intend to replicate with a couple more necklaces using some gorgeous vibrant coloured lime ribbon that I brought back from Denmark.

Having routed out some pieces of flat felt my other project yesterday morning was this simple spiky hair bobble.  Just get a long piece of felt a couple of inches wide and using a sissors or craft knife cut lines into one long side but not right through to the other side (hope this makes sense!).  Starting from one end roll the felt up into a rosette shape stitching a couple of times as you go along.  The slashed ends form a funky anenome style design and you could add a brooch back or as I did stitch on an hair elastic to create a fun felt accessory!

This morning I made some more felt flowers and two cuffs, after lunch (fed five hungry tree planters some home made red Thai curry!) I forced myself to sit down and finish several of the flowers by adding simple brooch backs.  The weather has been wonderfully crisp today so I was able to take some photos of the completed works and have just now uploaded them to my Etsy shop.

This large orange and turquoise flower would look equally at home pinned to an outfit or tying back your hair so I am actually giving the purchaser the option of finishing the flower with either fitting or else I can include both the findings for them to stitch on themselves!  It was actually when Hilary and I were working on Saturday that I thought of this colour combination.  Although I always tell students to either compliment or contrast I have never actually combined turquoise and orange myself before.  The mulberry silk around the outside of the base layer provides a nice highlight to the finished flower.  You can check out some more of the flowers on Etsy and I have also uploaded the cuffs too.

The tree planting is almost finished, it is amazing what 4 or 5 men can do with 13,000 trees when armed with a simple spade and a bit of will power! 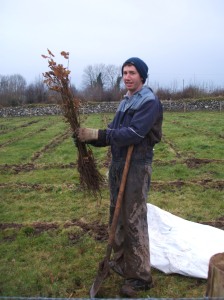 James with the oak

Alan and I have had NO internet connectivity for the last 4 days and although the motel we stayed in last night advertised high speed access this was unfortunately not to be!  Please excuse this really short post, I am afraid that I will get cut off at any time but hopefully tonight will be better and at last I will be able to update you properly about all our travelling and my fibre activities over the last days on the road.

I was thrilled to discover that I have won a gorgeous brooch from talanted Kate on her Tastykaeru fibre blog.  This is a great blog for all of you experimental fibre and mixed media addicts to follow, lots of interesting posts and beautiful pictures.  It will be very interesting to open the package when I get home, I have only used a needle punch embellisher once myself but know that the work created can be amazingly inventive and interesting.

Just leaving for the open road again, hope to catch up with everything tonight or some time tomorrow……  guess you could call me an optimist!

Great news, I got a phone call today and learnt that I have been accepted for ‘Craft in the Classroom’.   I am going to be teamed up with a National School in Ballinamore, Co. Leitrim (a very rural area for those of you not familar with the Irish countryside) which is brilliant, Alan’s father is actually from the area and his uncle still lives on the edge of town overlooking the canal.  Alan owns a small derelict cottage a couple of miles from Ballinamore and we have been stripping it out in preparation for a major restoration job on a budget, is there such a thing??  Anyway, as soon as I know some more details I will contact Alan’s aunt and uncle and book my bed, they run an excellent farmhouse B&B specialising in providing accomodation for keen fishermen and women.

Last night I staged a MAJOR battle with my sewing machine, I might even go so far as to say that I HATE the thing!  Two pieces of beautiful nuno felt later and I vowed that it would never see the light of day again.  I ruined the felt; my intention initially had been to sew some simple lined diary covers (for the 10 2009 diaries waiting in my studio) but after I wrecked the first piece I ammended my plan to some nuno wrist cuffs I had seen a pattern for in a great American quilting magazine.  No go.  More felt ruined.  I am now going to forget about sewing totally except for some easy beading, instead I am going to ask my friend Remmy to line a couple of bags if necessary and concentrate on making things that need NO stitches!

I have put some more images up on Flickr this morning but the battery on my camera is on charge again, I have nearly worn the poor thing out.  As soon as it is charged fully I will be able to load the images to my Etsy shop, for some reason they need to go directly from the camera and not from the web and that seems to be using a huge lot of battery power.    If you want to check out some of the items on Flickr I can say that the nuno scarfs will range in price from E30 (frothy neckpiece) to E60 (bronze nuno felted scarf) and the brooches and necklaces from E12 (pink and orange brooch) to E40 (reversible necklace).  To order any of these pieces before I put them up on my Etsy shop please email me directly, I would be happy just to charge you whatever it costs to post them instead of the Etsy charges but you would need to let me know asap!

Get My News by Email