Dawn and I have had a busy time of it since Chrissie Day and Nigel headed home on Tuesday morning. We’ve taken loads of pictures, I finished a lot of stitching while Dawn caught up with emails and facebook, we delivered my felt to Duckett’s Grove yesterday afternoon, collected mum’s car (because with Danish friend Kirsten arriving we couldn’t all fit in my pick up truck!), got up early again this morning for the official opening of the new craft and gallery shop, felted in the studio for the first time, was interviewed for the paper, filmed and interviewed for today’s RTE News, collected Kirsten from the bus and then headed home to Clasheen in time for an early supper and to watch the slot on the 6 o’clock news!!! 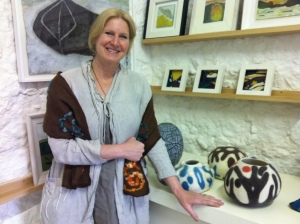 It really was a case of being in the right place at the right time. Edel Galvin from Carlow County Development Partnership had asked me if I would do a little felting demo in my new studio after the speeches and before I knew what was happening the footage was shot and I had my short moment of fame. The invited guests at the opening really seemed to appreciate the quality of the work displayed and it’s wonderful to finally have a local Co. Carlow venue to sell high-end craft from.

The fact that I have just secured a studio in the complex is really, really exciting. There may well be more workshops available in the future but currently there are 4 local artist makers who will be working from Duckett’s Grove and I feel privileged to say that I am one of them!!! I did think that I would be getting the keys today but there is still a bit of paperwork to complete so although I did get to felt inside the space for the first time today it will be another week or so before it is officially handed over to me! If you’d like to call in and say hello before I head to teach in the US I’ll be there all day on Sunday 6th May and hope to have a workshop schedule prepared for the rest of the summer, there will also be a big craft market in the grounds of Duckett’s Grove and all the studios should be open to the public!

Having fun felting for the first time in my new studio at Duckett's Grove!

Check out Dawn’s facebook page for loads of images of the buildings and the opening, she was snapping away and has some lovely shots.