It’s been another busy weekend for me!  On Friday morning I set up my stand for the first time at Borris Farmer’s Market, it’s always easier to repeat a display so I wanted to get in early and have time to decide exactly how best to show off the felt.  Flowers proved to be the favourite seller on the day, I priced them at E15 each, 2 for E25 or 3 for E30.  This didn’t allow much profit per unit but keeping the price down meant that I sold more overall, I think it was the right way to go and worth remembering for the future! 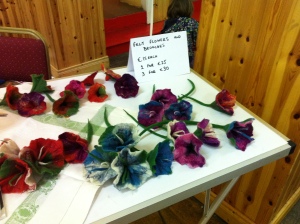 Setting up the felt flowers in Borris

On Sunday Alan gave me a hand unloading and setting up my space for ‘A Taste of Carlow’ before heading off to catch up with some paperwork.  The weather was HORRENDOUS while we were unloading the truck, wet, cold and very windy!  It was a little chaotic at the beginning when setting up, I chose to display my felt in an open sided marquee which was definitely colder there than in the individual wooden huts available.  My reasoning was that the open sided display area would hopefully attract more browsers. 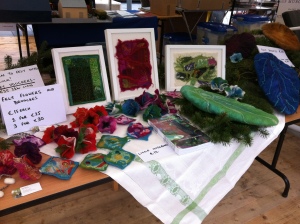 A Taste of Carlow

I was sited opposite the band area, beside the christmas tree and next to the wonderful organic food vendors, also the toilet was close by and when you are manning a stand by yourself this is a BIG consideration!!!  Once I had set up everything to the best of my ability given the weather constraints the organisers came around and apologised, several stand holders had arrived late and there was no space left for them.  Some of us who had come early in order to set up properly had to shift sideways and allow them cram in beside us so that was a bit of a pity, but live and let live, it wasn’t the end of the world!  Luckily the rain had eased off by about 2.30 so although the beginning of the day started badly for some people (several display stands blew down, one actually shattered!) the public did come out to support the event, all was well that ended well.  It took a while before anyone started buying but by the end of the evening I was very happy with the event.  There was a great Christmas atmosphere and bustle about the place, quite continental in feeling.  Obviously I wanted to make sales and I did, the biggest benefit however was meeting potential students and making contacts with sheep breeders, it was also great to catch up with old friends!  Check out this picture of Roisin modelling the felt snood her sister treated her to for Christmas!  Roisin learnt to felt with me recently and is really looking forward to participating in one of the hat making workshops I will be organising at Clasheen for Dawn Edwards.  Watch out Dawn because Roisin is a very talanted felter with a great head for design, it will be interesting to see what sort of concepts she has dreamt up by April!!! 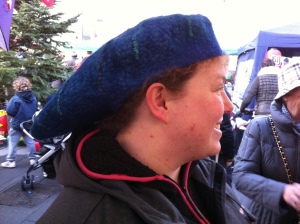 Yesterday I travelled to Dublin to help my mother with prep for some more hospital tests.  Before travelling home this afternoon I had to call in to Sylvia and effect some running repairs on her large felt rug.  Followers of my blog will remember that Sylvia commissioned a big rug from me last year, unfortunately her new rescue dog found some very interesting smells worth investigating recently but luckily only pulled off a bit of surface wool, no irrepairable damage was done!!!  I managed to needle felt (I know!) matching wool into the few damaged areas and Sylvia is now going to spot wash, hoover and steam clean the entire rug.  By the time this is done I don’t think that anyone will be able to tell where the  new areas of wool are, hopefully the steaming will remove any other attractive scents so I’m guessing that this is the only repair I will have to make, fingers crossed anyway.

I’m off now to put some food in the oven, walk REX and hopefully catch up on a bit of felting too.  I would like to have some new work ready for my second week at Borris Farmer’s Market this Friday!