My head is a little clearer now and my body a little less tired so here goes with continuing on from my first post about Charlotte Buch’s workshop in Denmark.  We started day one by drooling over the wonderful household textiles Charlotte had brought to discuss with us and listened to her explaining the techniques used while jotting our own notes in the workbooks supplied.  I was totally captivated right from the start as all the techniques could be applied to many different weights of fabric/fibre.  This meant that what we would be covering during the two days applied as much to sculptural work or clothing as to the household textiles that we were going to be making, the methods used have so many uses it is quite amazing!  Mainland European felters seem to work a lot more with prefelt/needle felt than we do here in Ireland and while I chose to work in my favourite short fibred merino (I brought Kap merino from Wollknoll with me) it was fascinating to see others stretching and working with commercially prepared needle felt.

Charlotte had brought some great images of underwater creatures and coral with her and because I knew that I wanted to felt something three dimensional a black, white and acidic yellow sea cucumber (or is it a sea slug?  Is there a difference???) seemed the perfect kicking off point for me.  Of course as soon as I opened my suitcase with all my many kgs of wool I discovered that I had left the black on my kitchen table so had to think laterally and decided to substitute with turquoise instead!  Cutting out a template was the easy part and this I covered with gauze to give the piece some extra stability, at least that was the idea, more on that later!!!  I wanted clear edges between the white and the turquoise wool so decided to roll a LOT of cords dry before dunking them in soapy water and ‘painting’ them on, my idea being that when the felt was wet out the lightly rolled edges would move together but the slight edges would prevent the colour ‘bleeding’ and merging together too much. 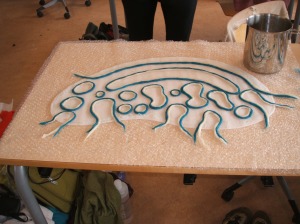 Laying out the first side prior to infilling with colour