Inspired by fellow Feltmakers Ireland member Sharon Wells, I decided to have another go at making myself a soft but structured felt hat that actually fits my very small head.  Sharon posted about making the origami hat from Christine White’s book Uniquely Felt on Feltcreative and since this project has always been on my ‘to do’ list and I had a pile of prefelt waiting to be used I decided the time had come to just give it a go!  In addition to Uniquely Felt the books that I would recommend for anyone wanting a bit more info about felting hats are ‘Fabulous Felt Hats’ by Chad Alice Hagen, ‘Filtning, Nunofilt & Nalefiltflor’ by Grete Lottrup and ‘Felting Fashion’ by Lizzie Houghton.  While Chad Alice’s book is the only one totally dedicated to hats all of them to my mind have helped me work out the various steps necessary to create stylish headgear that actually fits and is wearable. 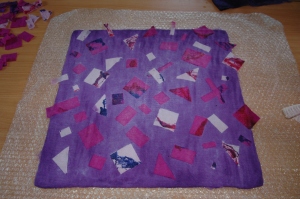 Laying out the prefelt shapes

Like Sharon I decided to work with a square resist 47cm wide.  One of my friends actually has my copy of Uniquely Felt so I just had to estimate how much wool I would need for each side, excluding the prefelt I used a total of 84g short fibred merino for the hat but have no idea if that is a lot or a little!  I laid out the wool extremely finely on both sides of the resist and then laid my prefelt shapes randomly on top making sure to overlap the edges in some places.  Because I originally intended having a brim that would turn back to reveal hand dyed silk fibres from the bottom of the other side, I chose not to position any prefelt overlapping the fourth edge as I was afraid I would forget exactly where the silk was once I started working the felt!

Due to my golf club commitments over the last few days (and I STILL have another golfing engagment tomorrow) I had to felt the hat over several different sessions and this afternoon I was able to finish fulling and shaping it over one of my cooking bowls.  Unfortunately, although I do have a hat block it is just too huge for my own head but the bowl worked perfectly so nothing ventured nothing gained. 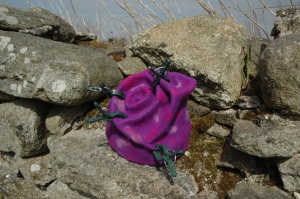 It did take a long time to shrink this hat enough to fit my head so the next one that I make (and there will be another one!) will have a wedge shaped template, not a square.  The other outcome with fulling as much as I did is that the clarity of the prefelt gets muted and the silk almost disappears into the wool, not a problem but definitely something to consider.  In the end I decided that I liked the brim folded inside of the hat instead of outside as initially intended, it would of course be possible to wear it both ways anyway!  If you are interested in seeing any more views of the hat in progress I have uploaded them to Flickr and as soon as the hat is dry I might ask Alan to take a picture of me wearing it!  Tomorrow is another day and I hope to crystalise plans for my American workshops and spend some time answering emails and generally catching up with things.

4 thoughts on “My new felt hat and a couple of book recommendations if you are interested in hats!”