Weather permitting I will take some photos tomorrow morning of the nuno felt wrap I made recently using cotton gauze as the fabric and some commercially produced needle punched merino as the wool.  This was another experiment I tried out at the start of my water difficulties and although the needle punched sheet was merino and the end result does look very pretty it does not appear to be as soft against the skin as my usual merino fibres would be. 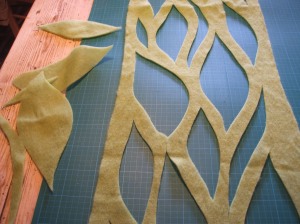 Cutting out shapes in the needle felt

From a design perspective it did work quite well however.  I laid the needle felt on my cutting mat and with a rotary cutter sliced out my design.  I wanted it to be reminiscent of foliage and removed leaf shaped pieces which I then added to the reverse of the gauze at both ends and in selected places along the side.  The cotton gauze that I was using was a gorgeous apple green and I decided to add small oval shapes in several places formed from hot orange, pink and plum coloured merino.  Actually felting the wrap took AGES!  The lay out was quick enough but the time saved by using the needle felt was totally eaten up and overshot by the length of rubbing and rolling I had to do to get the fibres to migrate through the gauze. 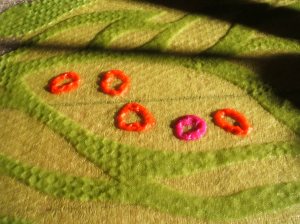 Wetting out the gauze and needle felt wrap

The ovals of fibre needed a huge amount of rubbing but this was probably because I almost dry felted them in my hands before laying them out on the gauze.  Eventually however everything came together nicely and after a couple of hours rolling the wrap was felted and finished.  When I take the photos you will see how nice this nuno felted piece looks against the light.  In actual fact I think that with a little bit of adjusting it would make a beautiful panel to hang from the trees although with our ongoing weather conditions here in Ireland maybe that would not be the most practical option!

Don’t forget that if you live anywhere within striking distance of me and would like to experiment making nuno felt I have a 2 hour workshop on at Clasheen, Borris, Co. Carlow this coming Saturday morning!  Please contact me asap to reserve your place.