I know that you have already seen an image of my first sample but here is a close up so hopefully you will be able to follow what I am talking about! 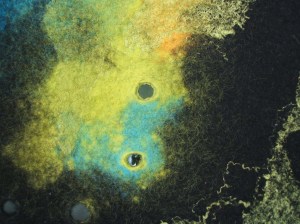 Close up of sample 1Sample 2

Lyda had brought a great selection of glass nuggets with her for us to share (apparantly cheap and easy to get in Ikea, roll on July 27th when the first store opens in Ireland!) so I decided to felt in 4 different colours to see which would work best with my wool selection.  Just by matching the nuggets up beside the raw wool I thought the the green colour would be best but also incorporated black, clear and frosted green.  I also covered one of the nugets with green gauze before covering with more wool thinking that it could prove an interesting contrast in textures when the glass was exposed.  In the close up above you can see how much shinier and visable the green glass was compared to the frosted glass and indeed these were nothing like as good as the black, black was by far the best contrast with clear glass second!  The other thing of note in the close up is how the silk chiffon that I used on top of the merino was almost totally submerged into the top layer of wool, useless for the bag as you would not have had any idea it was there at all!  I also used gorgeous silk hankies and silk twists on the reverse of the piece but again these just blended into the background.  What did stand out brilliantly however were the strips of green gauze (bottom right of image), I had never incorporated gauze into my work before and it was a revelation so off I went back into the traders hall (had to ration myself here!!) to try and get some turquoise gauze.  Unfortunately they did not have it in this colour but luckily I found some gorgeous pongee silk in just the right shade of blue.  Although by this stage everyone else was well underway laying out the wool for their bags I made the decision to make a second sample in order to discover exactly how the pongee would look against the black, blue and green for my backpack.

With this sample I laid out the wool a lot thinner than in my first piece (everyone else’s work was much thinner than mine in sample 1) so it felted quicker but Lyda said to stick with how I usually worked and to lay it as per my first sample.  I loved the effect of the pongee silk against the merino so with a happy heart started to lay out my backpack!  To be continued …..